Antibiotics are trace chemicals that kill or inhibit proliferation of other microorganisms. Since penicillin was first used in the 1940s, more than 5,000 antibiotics have been developed to date [1]. After the use of penicillin and methicillin, penicillin and methicillin-resistant Staphylococcus aureus (MRSA) appeared [2]. With the widespread use of antibiotics, vancomycin-resistant Enterococcus (VRE), carbapenem-resistant Escherichia coli, multidrug-resistant Pseudomonas aeruginosa, multidrug-resistant Acinetobacter baumannii (MRAB), and carbapenem-resistant Klebsiella pneumoniae (CRKP) emerged. In particular, these antibiotic-resistant strains have been detected in inpatients and in hospital environments, emerging as a global problem [3]. A. baumannii is a gram-negative, multi-drug-resistant pathogen that causes various infections and hospital infections in intensive care units. Common risk factors for the emergence of MRAB are hospitalization period and antibiotic use [4]. The World Health Organization (WHO) has identified A. baumannii as one of the most serious microorganisms that effectively avoid antibiotic effects [5]. Infection by A. baumannii accounts for about 2% of all medical-related infections in the United States and Europe, and about 4% in Asia and the Middle East [6,7]. Extended spectrum beta-lactamases (ESBL) can be defined as a group of enzymes that can provide resistance to penicillin and 1st, 2nd, and 3rd generation cephalosporin and aztreonam without cephamycin and carbapenem. Most ESBL are found in E. coli [8,9]. Of the 1,038 isolated E. coli strains, 44% (457 strains) were resistant to 3rd generation cephalosporin, of which 61.1% (276 strains) were ESBL E. coli. The prevalence of ESBL E. coli has increased worldwide and is a major cause of treatment failure in the intensive care unit (ICU) [10]. Carbapenem antibiotics are used widely to treat infections of ESBL-resistant intestinal bacteria. However, CRKP emerged due to misuse of carbapenem antibiotics [11]. CRKP represents a challenge to clinical care due to increased detection rate in the hospital environment [12]. In Korea, newborns were infected with Citrobacter freundii, which shows multidrug resistance to antibiotics, causing major social problems [13]. Therefore, special efforts are needed to prevent infection with antibiotic-resistant strains in hospitals.

Copper was used for drinking water sterilization and patient treatment in ancient Egypt and was found to contribute to food poisoning prevention when used as a material for 19th century tableware [14,15]. However, stainless steel became more widely used and the use of copper has decreased [16]. A study on copper surface sterilization of hospital microorganisms [17,18] and studies using copper as a surface material for equipment in food factories have been conducted [19]. In addition, a study on the use of copper surfaces was conducted to prevent cross-infection caused by facilities and equipment in the hospital [20,21]. Copper has a powerful ability to kill multiple viruses on contact. Copper can kill several infectious viruses, such as bronchitis and single or double-stranded DNA and RNA viruses [22]. Sterilization of food poisoning bacteria on brass (78% copper, 22% tin) and copper surfaces has been reported [23]. The inhibition effect of brass, copper and stainless-steel surfaces against MRSA and VRE also has been reported [13]. However, there is no research on the inhibition effects of brass, copper, and stainless-steel surfaces against MRAB, ESBL E. coli, and CRKP.

Therefore, in this study, the inhibition effects of brass, copper, and stainless steel for MRAB, ESBL E. coli, and CRKP isolated from domestic hospitals were compared to determine the utility of brass and copper surface in preventing cross-infection with antibiotic-resistant strains caused by domestic hospital environments.

The three strains used in this study, MRAB, ESBL E. coli, and CRKP were isolated and identified from wild strains at Uijeongbu St. Mary’s Hospital in 2020. Acinetobacter baumannii ATCC BAA-747, E. coli ATCC 25922, and K. pneumoniae ATCC 700603 were used as reference strains for studying the inhibition effects of the metal surfaces.

MRAB, ESBL E. coli, and CRKP isolates were inoculated into tryptic soy broth (Oxoid Ltd., Hampshire, England) and cultured at 35°C for 24 hours. After incubation, 1 mL of each culture solution was taken in a sterile tube and centrifuged at 3,000 rpm (Smart R17, Hanil scientific, Gimpo, Korea). After removing the supernatant of the centrifuged culture medium, 1 mL of sterile phosphate-buffered saline (PBS; Oxoid) was added and homogenized, followed by centrifugation at 3,000 rpm. After removing the supernatant, the bacterial cell count in each initial inoculum was adjusted to 8 log CFU/mL with PBS. Copper, brass, and stainless-steel plates were cleaned and disinfected by spraying with 70% ethanol after drying [23]. 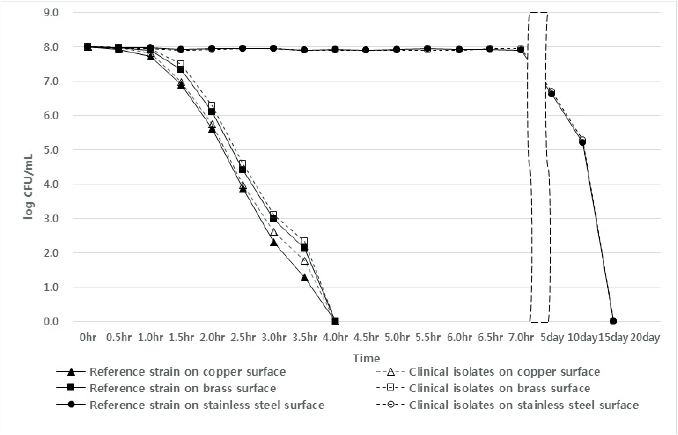 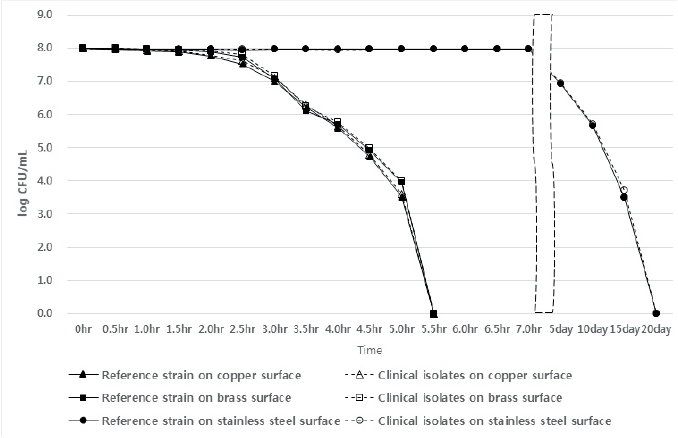 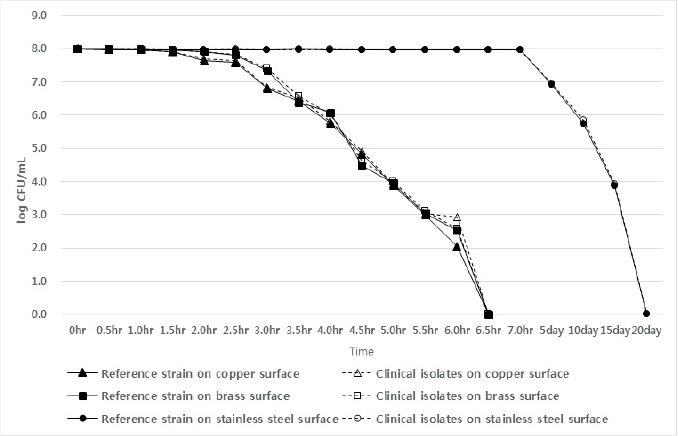 The hands of patients and medical personnel are reported as the main sources of cross-contamination in hospitals [25]; doorknobs, faucets, and bed rails are also reported as major sources of contamination [15]. In order to prevent cross-contamination in hospitals, the inhibition effects of copper, brass and stainless steel were compared and tested. A report describing testing of the sterilization power of copper on VRE found that it was not detected at 1 hour [14]. As a result of this study, MRAB, ESBL E. coli, and CRKP were not detected after 4 hours, 5.5 hours, and 6.5 hours, respectively. The previous report showed a stronger sterilization effect compared to the results of this study, and it is judged that this difference is due to the difference between the report of direct inoculation of VRE on the copper surface and the method of immersing the copper plate in the inoculation solution.

Brass is a Korean-specific tableware made of an alloy of 78% copper and 22% tin [23], and was used in this study to test the sterilization effect of the copper alloy. It was previously reported that MRSA was not detected in an experiment where a bathroom faucet was replaced with brass (Cu 60%-70%) [21]. In this study, MRAB, ESBL E. coli, and CRKP were not detected after 4 hours, 5.5 hours, and 6.5 hours, respectively. These results confirmed the microbial sterilization effect of brass. It was judged that copper alloy could show sterilization power similar to copper when used for door handles, faucets, and bed rails in hospitals.

The mechanism of bactericidal effect of copper is that copper damages the microorganism’s envelop and nucleic acids. It has been suggested that subsequent to the specific binding of copper to DNA, repeated cyclic redox reactions generate several hydroxyl radicals near the binding site causing multiple damage to the nucleic acids [17].

It was previously reported that it took 2 hours for MRSA and VRE to be reduced on a stainless-steel surface [14], and that the S. aureus survived for 4 days on the stainless-steel surface [16]. As a result of this study, MRAB, ESBL E. coli, and CRKP were not detected on the stainless-steel surface after the 15th day, 20th day, and 20th day, respectively. It was judged that the microbial sterilization effect of stainless steel was very weak compared to those of copper and brass. Also, the application of brass will make up for copper’s weakness because copper becomes rusty. Peracetic acid nd hydrogen peroxide may damage the metal surface including brass and copper. But glutaraldehyde and ortho-phthaladehyde may not damage the metal surface including brass and copper.

Newborns were infected with multidrug-resistant C. freundii, causing a major public health concern in Korea [13]. Concerted efforts are needed to prevent infection with antibiotic-resistant strains in hospitals. WHO reported A. baumannii as one of the most serious microorganisms [5]. ESBL E. coli is a major cause of treatment failure in the ICU [10]. The detection rate of CRKP has increased in the hospital environment [12]. Therefore, this study confirmed the sterilization effect of copper and brass on multidrug-resistant strains such as MRAB, ESBL E. coli, and MRKP.