Human cytomegalovirus (CMV) disease is commonly treated with ganciclovir (GCV) or its oral prodrug, valganciclovir. Second-line treatment drugs for CMV disease, including foscarnet (FOS) and cidofovir (CDV), target UL54 DNA polymerase. Prolonged antiviral therapy can lead to mutations in the UL97 and/or UL54 genes [1]. CMV resistance to these drugs is uncommon, ranging from 0.4% to 11.9% in solid organ transplant patients and 1% to 5% in patients who have undergone hematopoietic stem cell transplant [2,3]. However, drug-resistant CMV infection is associated with inferior prognosis in these two patient groups [2,4].

Patients suspected to be infected with resistant CMV strains following persistent or recurrent CMV detection after 4 weeks of antiviral therapy using GCV or FOS were subjected to UL97 and UL54 mutation testing in a consultation-based setting between November 2012 and May 2019. Clinical and laboratory data were obtained from the hospital’s electric medical records and laboratory information system. CMV polymerase chain reaction (PCR) was performed with Artus CMV PCR Test (QIAGEN Gaithersburg, Inc., Gaithersburg, MD, USA) using a Rotor-Gene Q (Qiagen Inc., Hilden, Germany), and the threshold of CMV detection was set as 2.42 log copies/mL. In September 2018, Artus CMV PCR Test was replaced with Abbott RealTime CMV Assay (Abbott Molecular Inc., Des Plaines, IL, USA) with the limit of detection value set at 1.49 log IU/mL. Direct sequencing of UL97 and UL54 genes was performed for detecting the CMV resistance mutations as described previously [8,9]. Variants were detected by comparing with the reference strain AD169 (GenBank accession number BK000394). Detected variants were analyzed along with the previously reported ones and synonymous variants were not analyzed [10,11]. Categorical data were analyzed with chi-square test using MedCalc (version 20.011; MedCalc Software, Ostend, Belgium). The Institutional Review Board (IRB) of the Asan Medical Center (No. 2012-0401) approved this study.

Four cases had UL54 mutations alone. Patient characteristics and CMV kinetics of these cases are described in Table 2 and Fig. 1, respectively. They all had a history of haploidentical peripheral blood stem cell transplantation (HaploPBSCT) and FOS was administered to these four patients before the detection of variants. 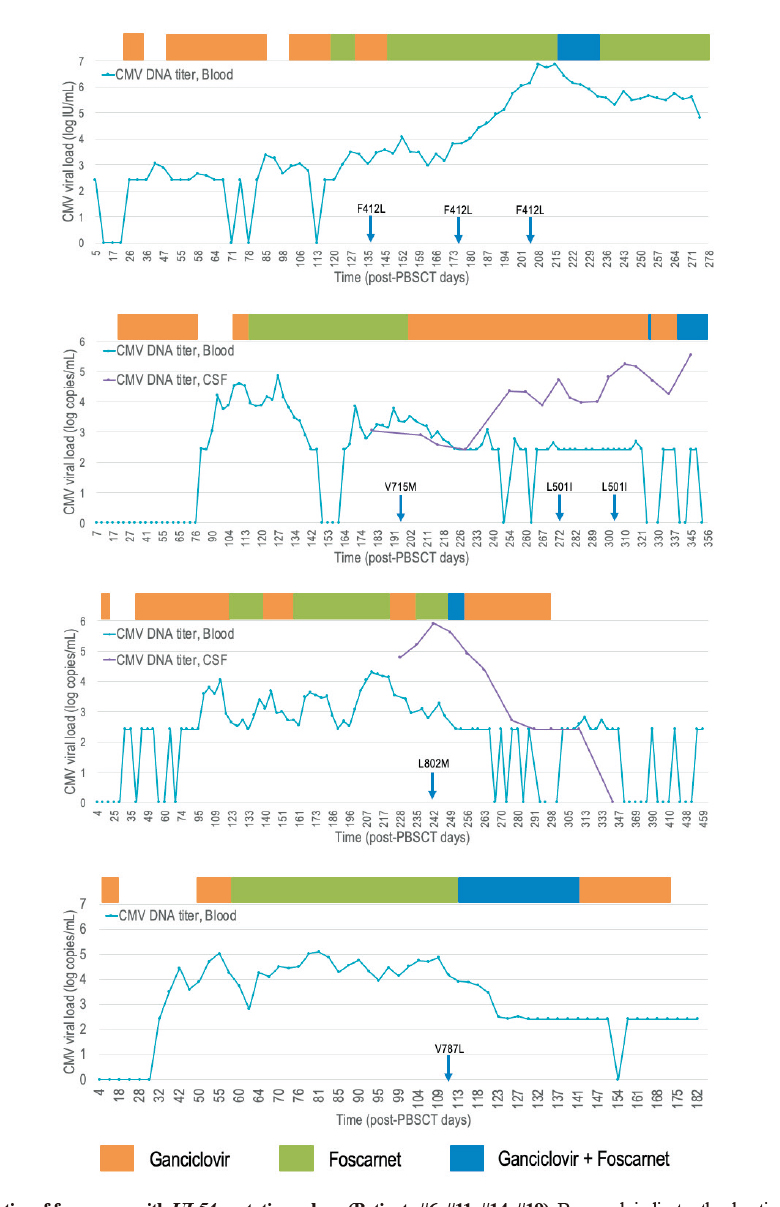 Approximately, one-.fth of the patients with persistent or recurrent CMV exhibited at least one mutation in UL97 and UL54. High prevalence of CMV mutations was mainly due to the inclusion criteria of patients with persistent or recurrent CMV after 4 weeks of antiviral treatment using GCV or FOS. Resistance emergence varied along with organ type among solid organ transplantation (SOT) patients [3]; thus, the composition of the included SOT patients could affect the mutation prevalence in this study.

Our study has several limitations due to its observational nature. Furthermore, our study population was limited to patients who were clinically suspected to have resistant CMV infection, and therefore, some patients subjected to more than 4 weeks of antiviral therapy for CMV treatment were probably excluded. Additionally, the number of patients infected with drug-resistant CMV in one institution was relatively small.

Conclusively, 21.5% of patients suspected with resistant CMV infection possessed one of the two UL97 and UL54 mutations. In addition, UL54 mutations without UL97 mutations was found in patients subjected to prolonged administration of FOS for CMV disease.

This study was supported by a grant from the Korean Health Technology R&D Project through the Korea Health Industry Development Institute (KHIDI) funded by the Ministry of Health and Welfare, Republic of Korea (Grant No. HI18C2383).