Background: Multidrug- resistant organisms (MDRO) are a serious concern in healthcare-associated infections. Hand hygiene (HH) is essential to prevent the spread of MDRO in the healthcare institutes. The aim of this study was to investigate the relationship between the incidence of MDRO and hand hygiene compliance and the experimental effectiveness of alcohol-gel hand hygiene practice.

Methods: From March 2016 to September 2018, we analyzed the cross-correlation between the incidence of MDRO and the HH compliance each month at Gyeongsang National University Changwon Hospital. We employed an experiment to observe the effect of alcohol gel hand hygiene practice on the reduction of organisms on the hand surface using the hand-agar plates.

Conclusion: The incidence of VRE showed a moderate correlation with HH among MDRO in the longitudinal analysis. HH practice was more effective in preventing the spread of VRE compared with other MDRO in our institute. Optimal alcohol-gel HH practice can effectively remove bacteria on the hand surface.

Multidrug-resistant organisms (MDRO) are a serious concern for healthcare-associated infections causing increased morbidity and mortality, especially for the immunocompromised patients. MDRO includes methicillin-resistant Staphylococcus aureus (MRSA), vancomycin-resistant enterococci (VRE), multidrug-resistant Acinetobacter baumannii (MRAB), multidrug-resistant Pseudomonas aeruginosa (MRPA), and carbapenem-resistant Enterobacteriaceae (CRE). The mode of spread or transmission may be different for each MDRO [1,2]. There are many ways to prevent the spreading of these MDRO in the healthcare institutes, such as surveillance culture, cohort of the carriers, reduction of antibiotics use, antimicrobial stewardship, early recognition of MDRO by adopting molecular tests, environmental cleaning, and education of medical personnel [1,3,4]. However, hand hygiene (HH) is the most effective and practical way to reduce spreading of MDRO [5,6]. Although there are many factors affecting the incidence of MDRO, we focused on the relationship between the incidence of each MDRO and HH rates to understand which MDRO is most closely related with HH compliance.

Optimal HH is defined as enough duration of alcohol gel rubbing (20-30 sec) or disinfectant soap use (40-60 sec) [5,7]. Short duration of disinfection is defined as inadequate HH and is rather common especially in the busy environment of critical care such as intensive care units (ICU) [7,8]. In addition, HH compliance monitoring is affected by the observers [5,8]. Although we expect a dramatic reduction of bacterial numbers after disinfection, objective data are scarce especially according to time duration of disinfection. Therefore, we compared the number of microorganisms on the hand’s surface before HH, inadequate HH, and optimal HH practices.

1. Incidence of MDRO and HH rate

From March 2016 to September 2018, we analyzed the incidence of MDRO and the HH compliance monitored by infection control nurses (ICN) each month at Gyeongsang National University Changwon Hospital. Incidence is defined as new positive cases of MDRO per 1,000 patient days requested either for surveillance cultures or from clinical specimens in the hospital. Routine surveillance cultures had been performed for all adult patients admitted in ICU to grow MRSA, MRAB, and CRE every week. There were no routine surveillance cultures for MRPA and VRE.

HH compliance is defined as ensuring HH for the indications monitored by infection control nurses. Time duration of HH was not included for calculation of compliance.

Hand-agar plate cultures for medical personnel’s hands before HH, after inadequate HH, and after adequate HH practices were compared. Agar-plate (E-CHECKER TPC, BANDIO, Pocheon, Korea) was inoculated with one hand’s surface touching before disinfection, after alcohol gel disinfection for 5-10 seconds (inadequate HH), and after adequate alcohol gel disinfection for 20-30 seconds. Thirty-seven volunteers had participated for this experiment. The agar plates were inoculated overnight at 37°C, and colony numbers were counted manually next day. Bacterial identification was not performed for hand-agar plate culture.

We used cross-correlation analysis using SPSS statistics version 24.0 (IBM Corp., Armonk, NY, USA). Auto-correlation values were calculated in time series cross-correlation analysis. These values correspond to the correlation coefficient. The ranges of correlation coefficient were defined as ‘very weak’ for 0-0.2, ‘weak’ for 0.2-0.4, ‘moderate’ for 0.4-0.6, ‘strong’ for 0.6-0.8, and ‘very strong’ for 0.8-1.0, respectively. Wilcoxon signed-rank test was used to compare bacterial colony numbers for hand-agar plate experiment using SPSS Statistics. Data showing increased colony numbers even after HH were excluded for analysis, because we considered these cases as improper contact of hand’s surface on the hand-agar plate.

We received the Institutional Review Board permission for this study (IRB No. 2020-03-042). All data of MDRO incidence and HH compliance were routinely produced for infection control purpose in the institute. In addition, hand-agar plate culture was also performed to increase the awareness of staff regarding the importance of HH. Therefore, this study was exempted for IRB review.

1. Incidence of MDRO and HH 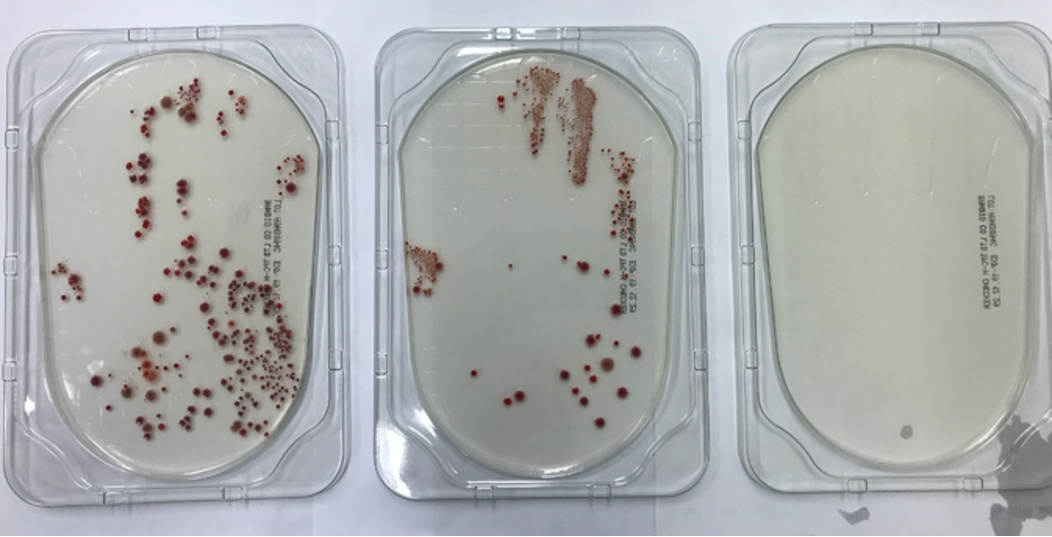 Fig.2. A photography of hand-agar plate culture (a) before hand hygiene (HH), (b) after inadequate HH, and (c) after adequate HH. 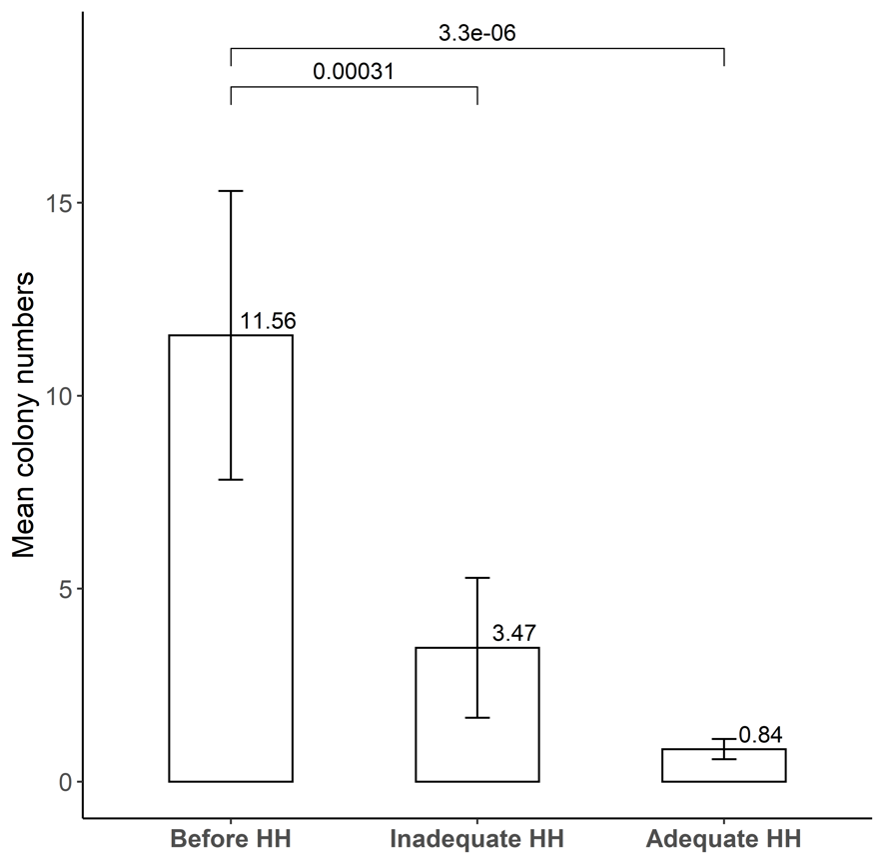 Improved HH compliance showed reduction of healthcare-associated infections [6] and was effective on nosocomial MRSA control [10]. Multifaceted infection-control interventions including HH reduced MRAB colonization and infection in ICU [11]. We reviewed HAI rates of MDRO, such as MRSA, VRE, MRAB, MRPA, and CRE in this longitudinal analysis. Incidence of VRE showed a moderate correlation with HH rate. Enterococcus transmission was confirmed by anesthesia providers, indicating the importance of intraoperative HH in the other study [12]. Institutional prevalence of these MDRO and other infection control measures would have affected the HAI rates too. Moreover, training on HH and measures to control MDRO spread may be needed for healthcare workers [11,13].

Hand-agar plate culture method could not only demonstrate HH practice but also could be used for educational purpose. Educational intervention for HH for dental students revealed a significant reduction of bacterial colony numbers observed on BAP in a previous study [14]. Strict HH even after wearing latex gloves may be needed to prevent urinary tract infections by Candida auris [15]. However, caution should be needed regarding the optimal procedure for hand-agar culture method, because lack of standardization may cause a biased result. We observed there were several cases of increased bacterial numbers even after inadequate HH. Bacterial numbers reduced significantly after optimal HH compared with that before HH, indicating the importance of optimal HH.

There are several limitations for this study. First, we observed only the relationship between the incidence of MDRO and HH rate. We did not analyze other factors, such as patients’ underlying diseases or severity, patients per nurse ratio, antimicrobial stewardship, antibiotics consumption, outbreak, environmental cleaning, and microbiological laboratory techniques. Second, hand-agar plate culture showed inconsistent results. Duplicate sampling or both hands cultures will be needed to enhance consistency. Larger numbers of participants will make the data more credible.

In conclusion, this chronological observation showed a moderate cross-correlation between incidence of VRE and HH compliance rate in our institute. Other MDRO showed very weak correlation, indicating that other infection control measures would be more effective for these MDRO. A hand-agar plate experiment proved the importance of optimal HH practice for the removal of microorganisms.

This work was supported by the National Research Foundation of Korea (NRF) grant funded by the Korean government (MOE) (No. 2018R1D1A3B07041280). The funder had no role in study design, data collection and interpretation, or the decision to submit the work for publication.