Background: The purpose of this study was to analyze the clinical and microbiological characteristics of recurrent urinary tract infection (UTI) caused by Escherichia coli— the most common etiological agent.

Methods: Cases of recurrent and single episodes of UTI caused by E. coli were evaluated retrospectively for a period of 6 months (January-June 2019) to analyze the clinical and molecular characteristics of this disease.

Conclusion: The control of antimicrobial-resistant ESBL-producing E. coli strains may be difficult using antimicrobial therapy and subsequently delay the clearance of the etiologic agent. This could play a major role in the development of recurrent UTIs.

Urinary tract infections (UTIs), which are defined microbiologically as the inflammatory response of the urothelium to microbial pathogens, are common bacterial infections. Approximately half of all women will experience symptomatic acute bacterial cystitis in their lifetime [1]. When the first infection is caused by Escherichia coli, women appear to be more likely to develop a second cystitis episode within six months than those with a first infection due to another organism []. In a Finnish study of women ages 17 to 82 who had E. coli cystitis, 44% had a recurrence within one year []. Repeated UTIs degrade the quality of life and can be accompanied by mood disturbances, such as anxiety and depression. Data on the current prevalence and factors influencing recurrent UTIs are scarce in Korea. The purpose of this study was to analyze the clinical and microbiological characteristics of recurrent UTIs by E. coli to identify the risk factors. The findings could help establish a management strategy to reduce recurrent UTIs and improve patient prognosis.

The study population was selected from non-duplicated patients admitted to the National Health Insurance Service Ilsan Hospital between January and June in 2019 and diagnosed with E. coli urinary tract infections based on culture results (n = 1,060). Patients with E. coli isolates from urine culture with 104 colony forming units (CFU)/mL or higher were included in this study. If two species were isolated from the urine culture (polymicrobial), we included only patients with E. coli at 105 CFU/mL or higher. We excluded cases with more than three species in the urine culture. For the risk factor analysis, we randomly selected cases (n=64) and controls (n=124) in which there were 213 recurrent episodes (cases) and 847 single episodes (controls). Molecular analysis was performed in 62 randomly selected E. coli isolates from subjects with recurrent episodes (two isolates were excluded because of repeated failure of cultures) and 62 E. coli isolates with single episodes,

PCR (polymerase chain reaction) of serogroup O25b and O16 was done to determine the sequence type (ST) 131 [4]. The ESBL genotype was verified with PCR-sequencing of CTX-M, SHV, and TEM-type genes [6]. For a carbapenem-non-susceptible isolate, carbapenemase genes were identified by PCR and sequenced using primers to detect IMP, KPC, NDM, VIM, and OXA-48 [8]. Pulsed-field gel electrophoresis (PFGE) was performed as described in our previous study [6]. A total of 124 isolates were included from recurrent episodes (n = 62) and single episodes of UTIs (n = 62). A total of 122 E. coli isolates were finally analyzed by PFGE because of repeated fails in two E. coli isolates. The patterns were analyzed using InfoQuest FP software (Bio-Rad, Hercules, CA, USA) to generate a dendrogram based on the unweighted pair group method, with an arithmetic average (UPGMA) from the Dice coefficient with 1% band position tolerance and 0.5% optimization settings.

Continuous variables, such as age, were analyzed by the Mann-Whitney U test. The chi-squared test was used for comparative analysis of the categorical variables to determine the independent risk factors. Odds ratio (OR) and 95% confidence interval (CI) values were calculated for the binomial variables. Variables with P-values less than 0.1 in univariate analyses were included in a multivariate logistic regression analysis model to determine the independent risk factors. Statistical significance was defined as P < 0.05. SPSS 23.0 software (SPSS, Chicago, IL, USA) was used for the univariate and multivariate analyses. This study was approved by the Institutional Review Boards as required by the hospital policy (IRB No. NHIMC 2020-03-002).

The E. coli isolates from patients with recurrent UTIs were much less sensitive to antimicrobial agents than those isolated from patients with single episodes, except for piperacillin-tazobactam, amoxicillin-clavulanic acid, cefoxitin, and minocycline (Fig. 1). Only one E. coli isolate was resistant to doripenem, meropenem, and imipenem, which was from a subject with recurrent UTIs. Neither colistin nor tigecycline-resistant E. coli were isolated from patients in either group. 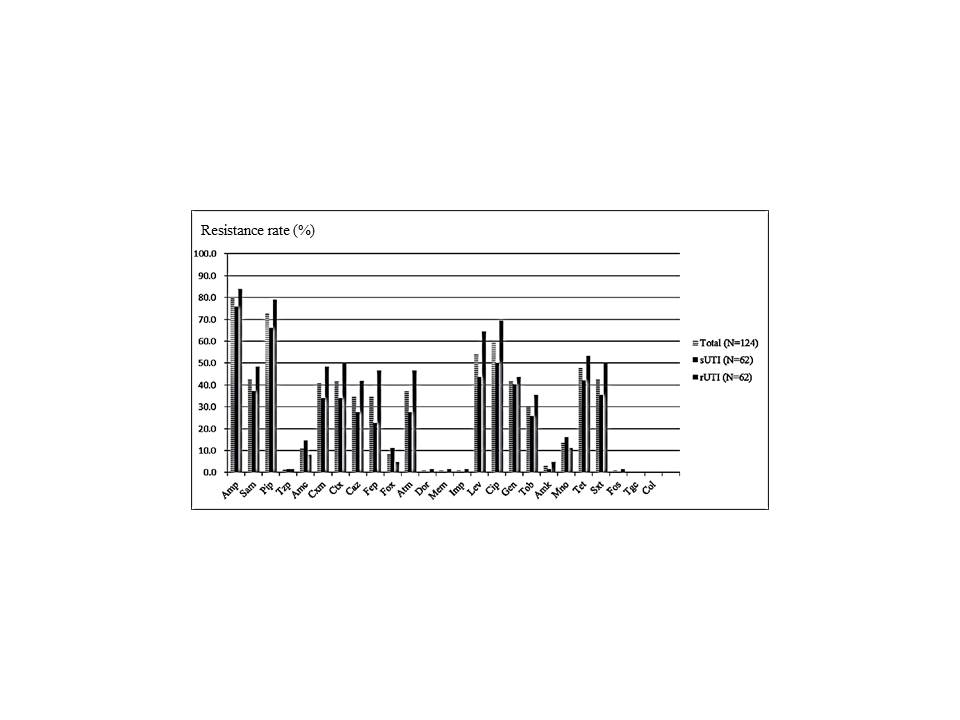 The ST 131 E. coli clone was frequently detected but the proportions were similar in both groups (35.5% in recurrent episodes and 30.7% in single episodes). The rate of ESBL producers in the recurrent episode group was higher than that of the single episode group (45.2% versus 21.0%, P = 0.0042) but genotypes CTX-M-15 and CTX-M-14 were common, i.e., more than 20% in both groups (Table 1). KPC-2 carbapenemase was detected in a carbapenem-resistant E. coli. There was no dominant clone in the PFGE patterns using an 80% cut-off (Fig. 2). 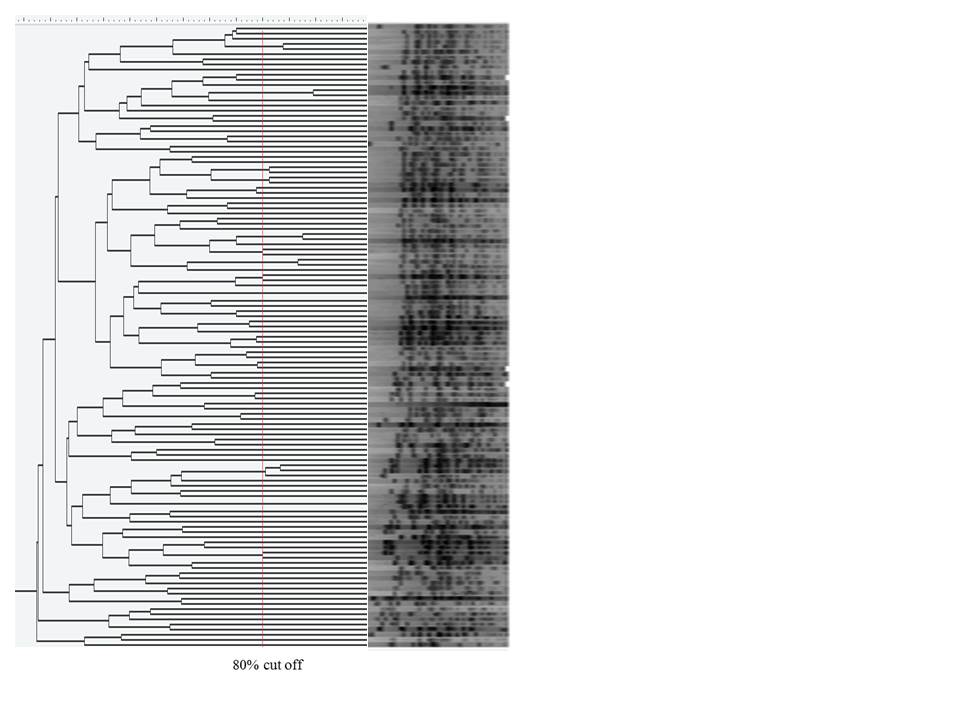 E. coli is the most common etiology of UTIs and 6,394 (11.1%) E. coli isolates were recovered from 57,477 urine cultures according to the first one-year report from Korea Global Antimicrobial Resistance Surveillance System (2016-2017) [4]. For the treatment of UTI, oral fluoroquinolone and oral cephalosporin are usually recommended for non-complicated cystitis and ceftriaxone and fluoroquinolone are strongly recommended according to the results of susceptibility testing for adult simple acute pyelonephritis [9]. However, the resistance rates in the E. coli urine isolates to cefotaxime, ceftazidime, and ciprofloxacin were high [4] because extended-spectrum-β-lactamase-producing E. coli (ESBL-EC) has increased in both community and hospital settings in Korea [10,11]. ESBL-EC breaks down extended-spectrum cephalosporin and aztreonam, showing wide-ranging resistance to cephalosporins except for carbapenem. Specifically, ST 131 E. coli, a high-risk clone with extensive antibacterial resistances, high-virulent traits, and increased propagation power, has contributed to the worldwide dissemination. ESBL-EC had multidrug resistance traits, which shows resistance to other classes, such as fluoroquinolone and aminoglycoside [12].

Old age, female, catheterization, and sexual activity are well-known risk factors of UTI [13] but the molecular epidemiology and risk factors of recurrent UTI have not been fully evaluated in Korea. Both bacterial factors and deficiencies in host defense could contribute to the pathogenesis of recurrent UTIs [14]. Bacterial survival in the urinary bladder after antibiotic treatment and progression to forming intracellular bacterial communities might be the most important bacterial factors. Immunodeficiency and urogenital tract anatomical abnormalities have been considered essential risk factors for recurrent UTIs.

In this study, the rates of ESBL production and antimicrobial resistance were different between the two groups of patients with recurrent episodes and single episodes. The differences in microbial clearance and the proportions of adequate antimicrobial treatment were also noticeable in the two groups. However, the proportions of associated disease, disease severity, urinary tract anomalies, and immunosuppressive therapy were similar between the two groups. We inferred that the multidrug-resistant traits of ESBL-EC may hinder adequate antimicrobial therapy and consequently delay the clearance of the etiologic agents, which could play a major part in the development of recurrent UTIs. Risk factors, such as healthcare-associated UTIs, E. coli bacteremia, and no microbiological clearance after seven days, were more associated with recurrent episodes, which could be used as predictors.

This study could provide recent data, including microbiology and molecular features, in addition to clinical features and antimicrobial treatments. The limitation of this study was that we defined UTIs based on urine culture results without consideration of UTI clinical features. As a result, asymptomatic bacteriuria could be included, even though we set the criteria to rule out contaminated urine cultures. Another limitation of this study, the used breakpoints are intended for the bloodstream infection. Because the definition of adequate antimicrobial therapy was based on this result, the resistance to specific antimicrobials did not definitely indicate UTI treatment failure due to a high concentration of antimicrobials in the urine. These two limitations possibly affected the low rates of empirical and definitive antimicrobial treatment.

In this study, we could not discriminate between reinfections or relapses in the recurrent episodes. Most recurrences are thought to represent reinfections rather than relapses (even recurrences caused by the same uropathogenic strain), although occasionally, a persistent focus can produce a relapsing infection [15]. However, others have said that it is because phenotypically based typing methods or less specific DNA-based typing methods were used [15]. It was reported that most recurrent UTIs were caused by relapse with the primary infecting E. coli according to PFGE analysis and may support the recent observation that E. coli could be an intracellular reservoir for recurrent UTIs [16]. Further studies are needed to evaluate the microbiological nature of recurrent episodes.

I would like to thank So Ra Yoon, PhD for the statistics from research institute of national health insurance ilsan hospital.